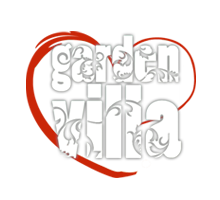 Deborah & Thomas and the Garden Villa

We are a Swiss-Australian couple, Deborah the Australian from Adelaide and Thomas the Swiss from Lucerne. In 1991 we met for the first time, when for both of us life changing happenings occured. In a remote and far away outback part of South Australia’s West Coast Thomas had an accident at an extremely rough coastal section at Talia Caves. He was washed off a cliff by a wave into the wild surf of the ocean. He faced death, could have drowned, been eaten by a shark or smashed against a rock. But, his time wasn’t up yet, the Universe had other plans for him. He survived nearly unhurt and even ventured into the best times of his life, finding the love of his life.

Afterwards, while Thomas was being treated for his minor injuries at the regional hospital in Elliston with a population of just 220, he met Deborah, who was a school teacher in this isolated community. Under those epic circumstances Deborah and Thomas became friends and Thomas visited Deborah and her family each time he returned to Australia. Many years later we became soulmates, lovers, companions and eventually husband and wife. But that took a long time and many twists of fate, lots of mutual faith and heaps of trusted guidance by the Universe. The whole of our wonderful story we will tell you in our book, «Our Love Created by the Universe» of which Thomas has written the first chapter. Of course there is also a picture book where you can view photos of our happy times we have spent together all over the world.

We now live happily in our wonderful Garden Villa in Lucerne, beautifully located in the quiet recreational area of Tribschenhorn. Our home was originally built in 1894 as an addition to the elegant neighbouring Villa Schröder owned by a rich family. First the little building was used as a simple garden house, then turned into bigger horse stables and finally further extended to a grand two storied staff house. When the owners left Lucerne they presented the local council with the whole property, under the sole condition that it maintains the estate as a protected area. Later on a sculpturer rented the house and added a spacious loft-like studio.

Finally Thomas’s grand parents took over the place, invested lots of personal money and effort and for the first time made the house liveable by contemporary standards. They resided here for nearly 30 years. After both his grand parents had died Thomas began living there in 2003 and with the support of his generous uncle and the Lucerne council started professional renovations which continue to this day. Deborah joined him in 2005 and together we have continued the hard, physical work along with the charming, decorative additions to create our much loved home. Authentic antique furniture from our family heritage combined with modern design, genuine pieces of art, true blue Australian memorabilia and beautiful gifts from mother earth that we have collected while roaming ancient lands and combing endless beaches make the Garden Villa our cosy home with its unique «shabby chic» style.

We named the place Garden Villa, and nowadays it’s not only our home but also our precious sanctuary and our rich inexhaustible source of positive energy and inspiration. We enjoy an extensive, simple but very delightful garden, surrounded by ancient, giant, majestic trees that guard us. Like those trees we are both down to earth, solidly grounded and deeply rooted here in our Paradise. And like those trees, we still branch out with wide open arms, hearts and minds to deepen our relationship, to continue our adventurous travelling and to open up our promising business opportunities.

The Garden Villa is our home, but one that we have chosen to share with the community of Lucerne, so that they can enjoy events and parties of their own in our inviting garden and party rooms.